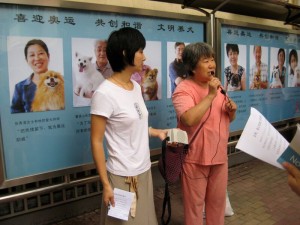 The City of Beijing has changed so much the taxi drivers who live there and drive it constantly and regularly get lost. I have been going there since 1979—when the skyline was low, the second ring-road (now there are six) was still not finished, and lovely jade green Daimlers flowed along majestically in the sea of black bicycles. It was not overly crowded then, but what population there was was strictly human—no pets allowed. They soon started to appear, however, as people got marginally richer, and by 1983, the government banned dogs and seven other animals, including pigs and ducks. But by 2008, the year of the Olympics—when this piece was made all that had changed. Dogs were taken as just another thing to be civilized and as a sign of civilization—You didn’t ban dogs like farm animals, you licensed them; you didn’t eat them, you cherished them as members of the family.The project had its origins in two of my own obsessions about the everyday environment of the small community, or shequ, of Tuanjiehu where I did an art/fieldwork residency at Red Gate Gallery for six months in 2008. The first was the number of neighbors who had small dogs as their constant companions. The second was the large glass “propaganda windows” that dot all urban neighborhoods, the space where the local cadres communicate news about health, welfare, cultural events and anything else the state has on its mind.

In July 2008, I invited neighbor and friend, Sun Lijun, to assist me in photographing as many of our neighbors as we could get to agree to a quite formal sitting portrait with their dog(s). This produced18 portraits, which I had printed at around life-size (from 16 X 20 to 17 X 22). We documented that processs in still and video.
We got together a team consisting of two more friends Yuan Yuan, a good writer, and Wang Tongxing, our local calligraphy teacher, excellent rhetorician and general man-about-the-park. And then we took our request to mount a Photo Show in the community to the local cadres in charge of cultural development. They had no indoor space, luckily, which allowed us to ask for the big glass vitrines outside the state neighborhood center—the propaganda windows.

At first they were surprised by this request—it’s unusual for such things to be initiated by people in the community and, uh, no, those windows were used for state business. Then one got the great idea: Putting up our show would be the perfect moment to launch a Neighborhood Dog Hygiene Movement—a Pooper Scooper Campaign. At the opening, on July 28, 2008, we were treated to several rousing speeches on Civilized Dog Raising, cadres from neighboring communities came by and took notes, the press arrived, and a friend made video of the proceedings. The dogs came too, ecstatically milling around our feet. The project only stayed up a week—then the windows were taken back for other uses. But in that time, the people of the community took over spaces heretofore never used by them. The usual ratio of “tiny photos lost in lots of words” was reversed, and their faces, for once, loomed large.

The original project was about re-contextualization through photography in several registers: by choosing to do seated formal portraits, everyone was invited to recognize the familial role of their dogs. They were taken up from the ground and held closely, indoors, and shot as though they were people.
These portraits, in turn, were exhibited in spaces where such things had never been seen before, mostly on account of their formality and size. If the reality of the importance of the dogs’ position as important members of the family was highlighted in portraiture, the appearance of life-size versions of the citizenry in the glass vitrines of the neighborhood committee performed an analogous recognition of hidden importance.

This project, which awaits a proper essay treatment raises several issues: –How does it fit into the problem of new forms of public space in a Chinese city? –How does (or not) the current self-organizing of people into “small groups” mobilize a post-socialist sense of sociality itself? Is it useless memory of nostalgia, or stubborn socialist hangover, or simply transforming aspects of a cultural repertoire, but one not yet devoid of politics? –What is this nexus between art and anthropology that harbors the ethnographer as perpetrator as much as observer?