Senses of Filiality: Bodily capacities, hierarchies of power past and present 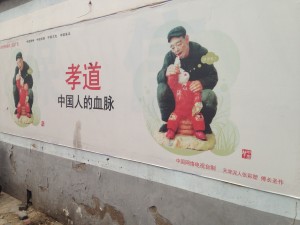 Last year I returned to my longstanding interest in 孝顺 or filiality (often also translated as “filial piety”). My earlier work on imperial ritual concentrated, in part, upon the emperor in his role as son, Son of Heaven and son in his genealogical clan line, and contrasted this with his role as arbiter of the cosmic-patterned cultural power of 文 wen (often translated as “text/s” ). In the past few years, the government in China has obliged this historian by reviving in various ways, subtle and not-so-subtle, discourses on filiality, including revising a law on Elder Care to emphasize that children must spend time with their parents (this was greeted by a fair amount of derision—see cartoon). There are museums on Filiality in history. A new version of the Twenty-Four Filial Examples has been issued. And importantly, propaganda postering has been visibly launched that mobilizes intergenerational affect to embody forth the “China Dream” campaign.

This fall I will be working on a project in Shanghai tentatively named Senses of Filiality: Bodily capacities, Hierarchies of power Past and Present. I’ll also present a paper at the American Anthropological Association in Denver in November. The panel, organized by Ma Zhiying and Erin Rafferty is called Reconfiguring and Remediating the Family: Accounting for a Strange Familiarity in Contemporary China. My paper will be “China Dreams: Of Filial Values in the Persuasive Forms of Social Propaganda, Past and Present”. It happens Saturday, November 21 at 10:15 am—please come by!

Two previous essays on filiality are here and here.