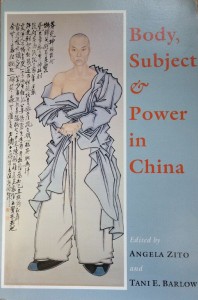 (University of Chicago Press 1994. Purchase the book) This volume brings to the study of China the theoretical concerns and methods of contemporary critical cultural studies. Written by historians, art historians, anthropologists, and literary critics who came of age after the People’s Republic resumed scholarly ties with the United States, these essays yield valuable new insights not only for China studies but also for non-Asian cultural criticism. Contributors investigate problems of bodiliness, engendered subjectivities, and discourses of power through sources that include written texts, paintings, buildings, interviews, and observations. Taken together, the essays show that bodies in China have been classified, represented, discussed, ritualized, gendered, and eroticized in ways as rich and multiple as those described in critical histories of the West. Silk robes, rocks, winds, gestures of bowing, yin yang hierarchies, and cross-dressing have helped create experiences of the body specific to Chinese historical life. Through multiple examples of reimagining subjectivity and renegotiating power, the essays encourage scholars to avoid broad generalizations about China and to rethink traditional notions of power, subject, and bodiliness in light of actual practices. 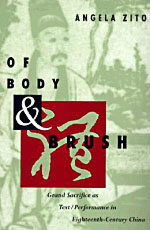 Of Body and Brush: Grand Sacrifice as Text/ Performance in 18th-Century China

(University of Chicago Press, 1997. Purchase the book) The Qianlong emperor, who dominated the religious and political life of eighteenth-century China, was in turn dominated by elaborate ritual prescriptions. These texts determined what he wore and ate, how he moved, and above all how he performed the yearly Grand Sacrifices. In Of Body and Brush, I original analysis of the way ritualizing power was produced jointly by the throne and the official literati who dictated these prescriptions. Forging a critical cultural historical method that challenges traditional categories of Chinese studies, this book shows for the first time that in their performance, the ritual texts embodied, literally, the metaphysics upon which imperial power rested. By combining rule through the brush (the production of ritual texts) with rule through the body (mandated performance), the throne both exhibited its power and attempted to control resistance to it. The book bridges Chinese history, anthropology, religion, and performance and cultural studies. 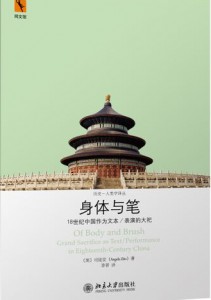 Of Body and Brush: Grand Sacrifice as Text/ Performance in 18th Century China 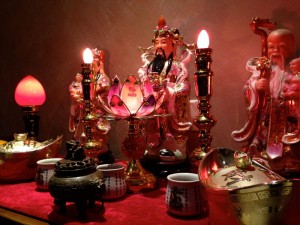 “Things Chinese” (pp. 290-92) and “This is not a façade” (pp. 70-85) in Making Things Public: Atmospheres of Democracy, edited by Bruno Latour and Peter Wiebel. (Chapters in Catalogue for exhibit in the ZKM Center for Art and Media of Karlsruhe, Germany, August 2005) PDF

Ten entries in the Encyclopedia of Confucianism, Oxford Press, 2000. PDF 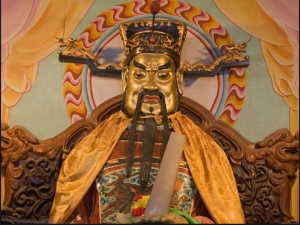 On April 27, 2000, Prof. Jennifer Rudolph of SUNY-Albany interviewed me about ritual power in Imperial China.
“The Emperor’s Body in 18th Century China”