Jump to: CRM, Digital Religion, The Revealer, Essays, Is Apple a Religion?

The Center for Religion and Media

at New York University began as a collaboration between me and Faye Ginsburg of Anthropology as one of ten Centers of Excellence funded by The Pew Charitable Trusts from 2003–2007. Religious life and media innovation are especially useful and provocative to think about together. In the twelve years since the Center’s founding, our understandings of both religion and media have broadened and deepened: We take “media” beyond “the media” – understood colloquially as the popular press — and into the mediation of social and political life more broadly, from the locus classicus of religious ritual as materialized in artifacts and embodied gestures, through calligraphy and printed prayer books, radio and televangelism, to contemporary forms of digital media. Extending our framework for understanding media in this fashion has implications for our analysis of religious life; we explore issues of ethical and communal import that encompass and go beyond institutionalized churches, mosques, temples or zendos, recognizing the intersections of religion and political life more broadly. At the heart of the work of The Center for Religion and Media lies an historical and ethnographic emphasis upon daily life and practice that has influenced the field of religion and media in general. This commitment to understanding how religions are actually lived can shed unexpected light upon the impact of religious practice on political and economic life, at home and abroad, in ways that are too often overlooked. CRM provides a space for scholarly endeavor, a stage for public educational events and an electronic interface with scholars, journalists and the public through our monthly online magazine, The Revealer.

For this initiative, The Center received funding from the Henry Luce Foundation. The project studied how religion intertwines with the update of digital/social media in recent unprecedented social and political transformations—in in particular but not exclusively in the Middle East, North Africa, and Central and Southeast Asia–along with the implications of these developments for international relations.

At the heart of the Center’s mission from the start, when it began as a critical blog by Jeff Sharlet, continued as a review of religion in the news and the news about religion under the editorship of Ann Neumann lies The Revealer. It carries on today with Kali Handelmann at the editorial helm. I have acted as “publisher” for this extraordinary arena that has allowed journalists hard-to-find space for long-form work and academics a forum for public writing. I have also written for The Revealer along the way:

Imagine this! Or Can a Church hierarchy become a Catholic community?

Talking about Into Great Silence

Listen to the Earth— Vodou coverage after Haiti’s earthquake 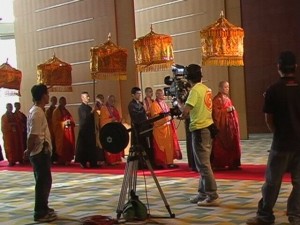 “Can television mediate religious experience? The theology of Joan of arcadia” in Hent DeVries, ed. Religion: Beyond a concept. (Fordham University Press, 2007). pp 724-738.

Is Apple a Religion?”
Interview at Minyanville

Is Apple Catholic? Is Microsoft Protestant? Has everyone converted?