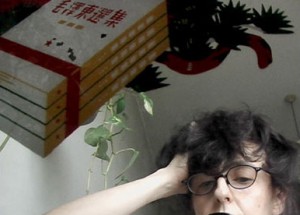 In 1979, just as the Cultural Revolution was ending, I spent three years in Beijing doing historical research on the social and political importance of rituals performed by the emperor. During that time, I also worked as dayside copy editor for The China Daily, China’s English-language newspaper, and then as a “newstaster” for the Reuter’s bureau. Having received a PhD from the University of Chicago, I now teach anthropology and history of Chinese culture and religions at NYU, where I have directed the Religious Studies Program off and on for the past fifteen years, and co-founded and co-direct with Faye Ginsburg the Center for Religion and Media. At NYU I teach both graduate and undergraduate courses. Visit my profile at the Anthropology Department.

My longest-standing interest remains the relationship between the psyche and the soma—how do human beings (mammals with imaginations!) deal with their imaginative capacities, make worlds and live with themselves and one another? How do we mediate these relationships, starting with the gestures of the body and the intricacies of language? People experience the world through their bodies in social practice: diet, sex and gender mores, the physical environment, both built and non-built, rhythms of household life and intimate relationships, communal ritual, work, art. Human life is organized, often at psychic and social remove, through embodied subjectification. The human person becomes both object and subject through discipline, training and practice. Much of my work in research and writing, the performances of my teaching, and most recently video-making, circles round these issues.